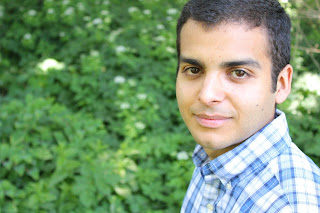 Hometown: Riverside, CA is where I lived the longest, but I moved a lot growing up so really nowhere.

A:  I'm currently working on a play inspired by Frida's time in Detroit. I'm not exactly sure how it will turn out yet, but the research has been fascinating and has helped me learn a lot more about where I'm living now. I'm also excited about the possibility of presenting it in Detroit because a lot of people, myself included, haven't really learned about the history of Latinos in Detroit, or even America for that matter. I feel like Latino history in American textbooks starts and ends with Cesar Chavez. I'm excited about going deeper with my own knowledge and seeing how that manifests into a play.

A:  I think my earliest creative memory was doing one-kid adaptations of the Wizard of Oz in my parents' living room using a funnel, a broom, and a pair of my mama's high heels. I think it's interesting that the idea of "home" is somehow in all of my works so far. It probably is because of the constant moving I did as a child, but maybe it has to do with my early love of the Wizard of Oz.

A:  I would want people to be as excited about new plays as they are about new music and new movies. I say "people" because that includes audiences, artistic directors, actors, designers, directors, and even people who don't know they like theatre yet.

A:  I probably never would've transitioned into theatre if it wasn't for Ntozake Shange, Octavio Solis, John Leguizamo and Culture Clash. Currently, I love the way Daniel Beaty weaves poetry into his work. I admire Katori Hall's creativity and ability to play in structure. I also really dig Matthew Paul Olmos' ability to capture the voices of So Cal Latinos which I love seeing on stage.

A:  I am excited about anything that is unique. If I feel like I can see it anywhere, I give a side-eye to the producing theatre company. When I walk away feeling emotionally disrupted because I've seen something so original that I'm still trying to understand it, I get really excited. I really appreciate when a theatre takes a risk to do something no one else is doing. I love seeing something and walking away saying, "That character felt like a real person, but not like anyone I know."

A:  I feel like I'm just starting out myself, but it's been really helpful for me to do readings with actors who get my voice and rhythm. If actors who understand my flow get a line wrong, I know it's something I messed up on. I know that means I have more work to do. I also find that building that ensemble of actors helps fight writers block, because I ask myself "Who do I wanna work with?" and "What would be the perfect role for them?"