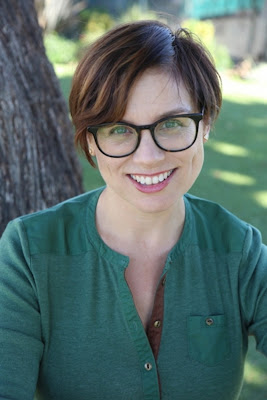 Current Town:  L.A. has been home for a total of 14 years (with 10 months spent on a remote island in the PNW and a year and a half in Chicago.) I constantly feel torn between L.A. and Chicago because both cities have my heart. P.S. I love winter. I love snow. I love bundling for the cold… but of course that’s so easy to say because I no longer have to live in it. I suppose I’ve romanticized it. That said, I did spend four weeks in the Chicago winter last year for family and the opening of The Abuelas. And I loved every second of it.

Q: Tell me about The Abuelas.

A:  Here’s the synopsis:

Gabriela is an Argentine cellist living in Chicago with her American husband and adjusting to life as a new mom. A surprise visit from two strangers exposes a devastating secret in this visceral look at the repercussions of Argentina’s so-called “Dirty War.” The Abuelas explores the heart’s capacity for forgiveness — even in the face of the harshest betrayal.

We are heading into tech for the West Coast premiere opening on October 11th at Antaeus Theatre Company in Glendale, CA. The world premiere was in February in Chicago with Teatro Vista at Victory Gardens. I wrote it in 2016 on the heels of my play The Madres - which is about three generations of women during the so-called “Dirty War” in Argentina. The Abuelas is the companion play and is set in Chicago 37 years after The Madres ends. It’s a companion play, but both plays stand on their own.

I came to the subject for many reasons. I have Argentine family and I was actually in Argentina in 1980 during the Dictatorship (I was five then.) The images of the soldiers with their big guns in the airport imprinted on me. It was much later, when I was living and working in Buenos Aires that I began to learn about what actually happened in Argentina during that period. I had a friend who was doing a documentary on Las Madres de la Plaza de Mayo-- the mothers whose children disappeared during the dictatorship. It was because of their bravery and activism that the world really learned about what was happening during the dictatorship. They went every Thursday and marched in a circle in front of the Casa Rosada, demanding to know what happened to their children and grandchildren. They continued to march after the dictatorship and still march today.

My play is about a woman who discovers everything she knew about her life and her identity to be a lie. It explores how one can move forward after betrayal. It asks what can be forgiven and how do we move forward? There is a lot of history, politics and heartbreak at the foundation of my play, but the story is specific and personal to these characters. My goal is to draw the audience in with these characters and take them on a nuanced and deep journey that challenges and also, though dark, still maintains at least a promise of hope.

A:  My play Friends With Guns about liberals and guns just opened its third production in Minneapolis. There will be another production of that in Chicago (soon to be announced) in 2020. I have a new play called The Ordeal of Water that I’m submitting to all the development opportunities that’s inspired by the first women to work as longshoremen at the Port of Los Angeles and I am researching my next play that has me very excited, but that I’m not ready to talk about just yet. I have a one-week workshop of my play The Sister House with Inkwell Theater Company in L.A. in December. I’m also adapting Friends With Guns and writing a television pilot - trying to actually make some money.

A:  I think I need a magic wand. There are two things. One: lower ticket prices to make it more accessible to everyone. I think in an ideal world, no more than $15 for any ticket. And two: pay everyone who makes theater a living wage.

A:  Paula Vogel, Quiara Alegria Hudes, Lin-Manuel Miranda, Charlayne Woodard, Phoebe Waller-Bridge, Caryl Churchill and oh how I could go on. And then there are the heroes who make theatre and are enormously dedicated to playwrights and new work. There are so many out there, here are five people who gave/give all of themselves to the creation of new work every day and who were or have been personally instrumental in my life: Russ Tutterow, Ann Filmer, Nan Barnett, Jordana Fraider, Samara Harris.

A:  I get excited when I see something I’ve never seen before… especially if it grabs me emotionally. Especially when it’s a truth so vulnerable and dangerous, like an exposed nerve. I get really excited when I feel like the entire audience is breathing as one. I felt all of this both times I saw Indecent by Paula Vogel, for example.

A:  Don’t be precious about your work. Don’t try to write a perfect play, instead, write a truthful play. Be bold. Rejection is required. A lot of it. So get cozy with it. Connect with other playwrights and join the New Play Exchange. Keep learning. Find your community. If you can’t find one. Create one. Oh- and don’t wait for someone else to produce your work. There’s so much to be learned in producing it yourself, especially if you surround yourself with intuitive and talented people with a lot of energy. One of the best things I ever did for my writing was attend the Kennedy Center’s Summer Playwriting Intensive led by Gary Garrison. If you can do that, I can’t recommend it enough!

My plays on NPX: https://newplayexchange.org/users/281/stephanie-alison-walker

To learn more about the work of the Abuelas de Plaza de Mayo, please visit their website: https://abuelas.org.ar