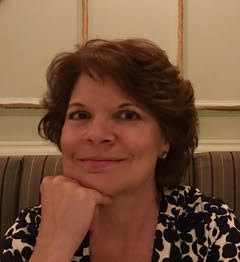 Q:  Tell me about your show that was cancelled because of the coronavirus.

A:  It’s My Party! tells the story of the women who fought for the passage of the 19th Amendment, ensuring U.S. women had the right to vote. It tells of the political maneuverings and popular protests that the two major factions, National American Woman Suffrage Association (the old guard) and the National Woman's Party (the upstarts) engaged in. Also their dismissal of the efforts of their black sisters. It deals with broken promises, institutional racism, and pervasive misogyny. It’s a play very much for our time. It’s also a hopeful story about citizen activism. And a celebration of the Suffrage Centennial of 2020. March 21st was to have been my university premiere at Bellarmine University in Louisville. I was able to Zoom in to several rehearsals, and was so impressed with what the cast was doing onstage, and the vision of the director, Megan Burnett. It is heat breaking that they will never hear the audience applaud their terrific work!

A:  Theatre is going to change a lot, in the face of our New Normal. Last month I would have said we need more government and corporate support, as an acknowledgment of the importance of arts, story-telling, and the connectional nature of theatre to people everywhere. Now I am thinking that the economic and political leaders of our reshaped world must prioritize all arts. It should be one of the first things they do. Theatre, especially, will provide a healing balm— a place for stressed, weary people to come together in community, to dream of better days ahead, and to find new reserves of imagination and empathy.

A:  Theresa Rebeck and all the founding members of Honor Roll!, an advocacy and action group of women+ playwrights over forty - and their allies - whose goal is inclusion of these playwrights in theater.

A:  Theatre that makes me think is what I like best. And that can take many forms—non-realistic plays; retellings/restagings of well known stories; even “well-made plays” if they have a strong argument. I also love musicals, and keep searching for my own way to convey character, theme, and plot in the same kind of magical shorthand as a good song.

A:  Find a writing group that reads your pages aloud. You need to hear them. Get some actor friends together, too. Listen to comments, but learn to separate the ones that involve personal taste from those that ask more craft-related questions. The first you can disregard, but the latter will lead to discoveries. Be steadfast, and be guided by your own inner vision.

A:  It’s My Party! is scheduled to have its Southwestern Regional Premiere at Echo Theatre in Dallas in September.

My play Becoming Calvin is available on Amazon.com

My one-woman show, Off the Wall: The Life and Works of Charlotte Perkins Gilman is available on Stageplays.com

And you can read my other plays on New Play Exchange!

This blog very good information, thank you for sharing ^^

Great content & Thanks for sharing ith oflox. Do you now What Is Parked Domain

Thank you for your post, myself very happy to read it because it can give me more insight, thanks.. Visit my blog..thankyou
Sbobet369
Slot369
Slot88
Maxbet388
Joker118

Pretty good post. I have just stumbled upon your blog and enjoyed reading your blog posts very much. I am looking for new posts to get more precious info. Big thanks for the useful info
Sbobet777
Slot777
Bola888
Judi Slot Online
Sbobet168

It was very useful to me. Thank you so much as you have been willing to share information with us. We will forever admire all you have done here

Amazing article. Your blog helped me to improve myself in many ways thanks for sharing this kind of wonderful informative blogs in live.
Really very happy to say, your post is very interesting to read. I never stop myself to say something about it. You're doing a great job.

Thank you for your post, I look for such article along time. myself very happy to read it because it can give me more insight, thanks.. Visit my blog..thankyou
Bet88 Slot
Joker388
Sbowin Com
Sbobet365
Live22 Slot

hai. Thanks for you information that realy useful, i thing this information is realy nice for sharing with my friend
Slot888
Sbobet168
Fa Fa Slot Hoki
Agen Bola Euro 2020

I really appreciate this wonderful post that you have provided for us. I assure this would be beneficial for most of the people. thank you for sharing information
Pandora88
Pandora88 Slot
Slot168
Maxbet88
Sbowin Bola

hai. Thanks for you information that realy useful, i thing this information is realy nice for sharing with my friend
Slot888
Sbobet168
Fa Fa Slot Hoki
Agen Bola Euro 2020

Simply want to say your article is as surprising. The clarity in your post
is just great and i could assume you’re an expert on this subject.
Fine with your permission let me to grab your RSS feed to keep updated with forthcoming
post. Thanks a million and please carry on the rewarding work.

always i used to read smaller content that as
well clear their motive, and that is also happening with this paragraph which
I am reading here.

Magnificent beat ! I wish to apprentice while you amend your site, how could i subscribe for a blog
website? The account helped me a acceptable deal.
I had been tiny bit acquainted of this your broadcast offered bright clear concept

I’ll right away seize your rss feed as I can’t find your e-mail
subscription link or newsletter service. Do you’ve any?
Please allow me recognise so that I could subscribe.
Thanks.