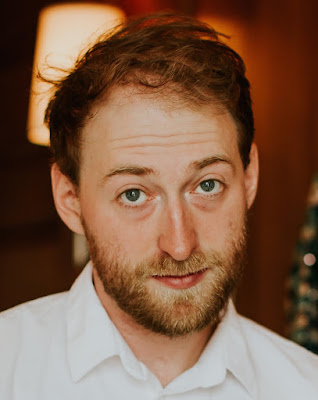 Q:  Tell me about In Tongues.

A:  In Tongues is about the death of a true crime author and her husband and little sister trying to understand what, if anything, the case she was investigating had to do with her death. More broadly, it's about grief and how we move on when we don't have the answers that could give us closure. What if we don't actually want the answers we're looking for? Also, why are we seemingly all obsessed with true crime these days? These are some of the things the play is dealing with. But it's funny too, I swear.

The play was supposed to open on March 17, at the University of Lethbridge, in Alberta. It's been understandably postponed due to COVID-19. but there are plans to remount in the fall.

A:  I'm working on a one-woman comedy about the inconvenience of falling in love while preparing for the end of the world. I'm also developing a play about how friendships fall apart because of the way we internalize class and status. I have a few drafts, but it remains mostly a fuzzy-but-urgent-mess in my head. Janelle Monae says, in one of her songs, "everything is just sex, except sex, which is power" and that has something to do with it, too. Oh, and the devil! Working on a creepy, fun show about the devil.

A:  This isn't exactly a story, but it's an observation that I think relates to who I am. I was a fairly sensitive, introverted kid and I was always, always drawing. It was something I could obsess over, and pretty quickly I learned that it had enormous social benefits. People would want to be friends with me if I was good at drawing, which was a pretty good reason to keep doing it. I still struggle to relate to people, and sublimate many of my deeper feelings through my writing, which is problematic in some ways, I'm sure, but makes it all the more meaningful when others see something of themselves in the work.

A:  I'm gonna cheat and say two things.
1. I want to see more theaters produce more new work by a more diverse array of writers.
2. I want federally-imposed limits on how much Shakespeare is produced. Like, every municipality gets two a year, ideally both in a park.

A:  Tony Kushner is the first name that jumps to mind. Every time I read Angels in America, the play changes, like it's a living thing. It got me invested in what playwriting can do. It's full of big moral arguments, yet at the same time is so achingly human. I still marvel that it exists. I love the work of Lynn Nottage, Tracey Letts, Annie Baker and Judith Thompson. Shout out to my Canadian playwriting heroes who have helped me and inspired me personally: Clem Martini, Sharon Pollock and Daniel MacIvor.

A:  That kind of theater that is not resolved: where the creators are struggling with the essential problems associated with being people and trying to figure it out *in the work*. When you do that, the theater becomes a place of communion and that's when it's most powerful.

A:  Two things: write a lot and find your people. Writing is the best teacher, so do it a bunch and then show it to your people. Showing your work to others is a difficult thing to do, and a delicate relationship in the early stages. Find the people who inspire you show them your work. Collaborate. And some very specific advice: do some acting. I'm not an actor, but getting on stage every so often really helps me when I'm writing dialogue.

A:  If you're a New Play Exchange user, you can read my work at https://newplayexchange.org/users/7107/james-odin-wade

Otherwise, see what I'm up to at jamesodinwade.com or on Twitter at @jamesodinwade. I fancy myself funny, but it is a contested claim.