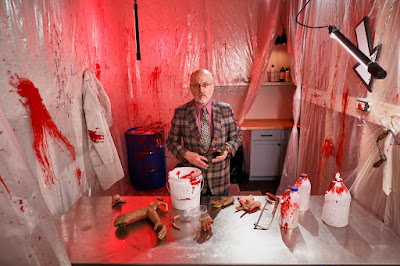 Q:  Tell me about your short play project.

A:  The Short Play Project is a social distance art experiment, in which people are invited to make videos from my short play scripts which I then post on social media.

A couple weeks ago, when all the theaters were closing, Rubber City Theatre, a small company in Akron was putting on one more performance of “Love’s Labour’s Lost” which they intended to livestream. I was fortunate enough to be part of the very small, invitation-only audience. I mean, it was a comedy, they needed laughers, and they got them.

Even while I was enjoying the show, I was thinking, what next? I had written a play that was due to be workshopped at Cleveland Public Theater next month as part of their Test Flight new works series, but I was already pretty certain that wasn’t happening.

I have, since last fall, been writing one short play, almost every single day. I’ve always been impressed by all these playwrights posting very short works, ten-minute plays, one-minute plays. I felt like I had been letting myself down not creating some myself.

So, I found some writing prompts I liked, made it a morning duty and now it’s a compulsion. I have banked nearly 150 two-to-three-page plays at New Play Exchange.

And I thought, I have all the tools. I have pages on Facebook, YouTube, Twitter, Instagram, I have an outlet. And like most of us I have a boundless number of creative friends who are suddenly without much to do. The day after the Rubber City show I put out a call for folks to make short videos from my scripts. To date I have handed out over eighty scripts and have posted over a dozen short plays.

What is most inspiring about the videos my friends and colleagues have been creating is the manner in which they are doing so, in quarantine. With loved ones, children, over the phone, via Zoom and other platforms, or entirely on their own. Several of my pieces have taken on unexpected significance in their new context.

A:  The piece I mentioned, the one which was to receive a weekend of performances in April, is The Witches. It’s about a Witch Panic-themed tourist attraction in a city near Salem, run by a small staff of women of varying ages and backgrounds.

The inspiration for this piece are those people who have taught me the most; the women in non-profit who have been my managers, my bosses, and my mentors. This play is my opportunity to show them how much I love them and have learned from them. It’s also a comedy.

A:  When I was nine, our family took a vacation in England. The whole family, including my grandfather, who was already in his eighties. We did all the requisite touristy things, and Mom got tickets to the hot new show, the West End run of A Chorus Line at the Drury Lane Theatre.

I thought it was amazing. A lot of it was over my head, to be sure. I knew nothing about sex, puberty, “the life.” I was a little embarrassed to be sitting next to my mom, taking all of this in. It was only much later that I realized how humiliated she must have felt, sitting between her son and her father for this racy show that she had chosen.

For better or for worse, however, it was the stories that stuck with me. The direct, confessional narrative of those characters, telling their stories. Just telling them. But also the manipulative way in which they were arrived at. Zach is an asshole. He’s casting a show, what right does he have to probe so deeply into the personal lives of these professional performers? That’s some old school theater bullshit, right there.

It was bad wisdom for a nine year-old with a future in the arts, and it took me a long time to understand the difference. Between the artist and the art.

A:  Significant public funding for the arts, in general. Theater in particular. I’d feel threatened by it, honestly, if people with real talent were vying for my position, because the pay was good? Seriously, though. Imagine theater tickets that could compete with the price of movie tickets, or internet. Small houses that could afford professional-grade sound and video. Health care. It’s a dream imaginable only to pretty much everyone else in the industrialized world.

A:  Sam Wanamaker was accused of being elitist when he, an American, led a campaign to create a new Globe Theatre on the south bank in London. It would be a museum, just a tourist attraction, not artistically significant. Instead, Shakespeare’s Globe is at the forefront of reinterpreting classic text for a new millennium, employing a diverse company of performers and commissioning and producing exciting new play scripts written by and about woman-identified actors and persons of color.

Lauren Gunderson has broken the paradigm of big city legitimacy, rising to become the most produced playwright of recent years by creating the kind of work that speaks to the widest American audience; adventurous, progressive, and grounded. She makes me want to write more and more plays.

And I still think Hamilton is pretty astonishing.

A:  Writing is the exercise, it’s not the product. I wish someone had told me that. You think, I’m going to write a play, and then you don’t know how, because you never have. Like, I’m going to run a marathon, but you can’t just head out one day and run one. You run every day, to get to know what running is, and how you run best, and then you run a race and that’s a play. Because you ran a little every day. You knew how, and you were trained for it.

Then once you’ve written one, you write another one. And then another. And then you look back and you realize you’ve been a playwright all along.

A: Yeah! Check out the Short Play Project on YouTube (https://bit.ly/39fmgxG) and join my Facebook page (http://facebook.com/David.Hansen.playwright). I have work published at Playscripts, Inc. YouthPLAYS, and on Amazon, and if you want to read one of my full-length works at New Play Exchange, I recommend “The Way I Danced With You (The George Michael Play).”

Go for the best services and devices to help yourself. Talk to the customer care executives with the free spirit if some kinds of issues stop you to make the necessary decisions.

We are a top rated online essay typer Online service here with experts specializing in a wide range of disciplines ensuring you get the assignments that score maximum grades.

If you are running short of time and have an instant need to complete your really tedious chemistry assignment, then please go ahead and get in touch with us. We, Help in Homework offer high quality and meticulously researched Chemistry Assignment Help to students who are not able to complete their assignment on time as per the given specifications. Our experts are known personalities of their fields and have helped students consistently. They would without a doubt complete your assignment and help you score the coveted A grade, that too, at a nominal charge.

if you have any query related to office setup then contact now.

We are a top rated online essay typer Online service here with experts specializing in a wide range of disciplines ensuring you get the assignments that score maximum grades.

If you have any query related office,cash app, notton visit us for solution...