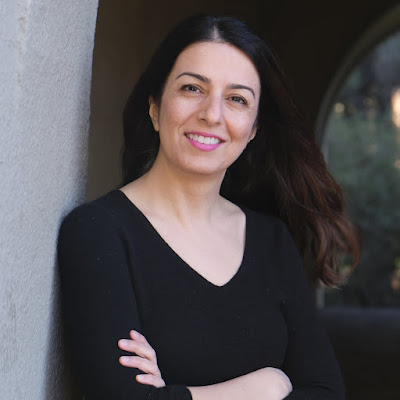 
Hometown:  I was born and grew up in Tehran, Iran.

Q:  Tell me about your show that was canceled because of the coronavirus.

A:  We had been rehearsing my trilogy of absurd plays called Peace, a Massacre, and the Umbrella, which was scheduled to be performed in early June at Central Stage. The project is now on pause.

Each part of the trilogy examines the idea of xenophobia in a different environment: a surreal distant civilization that is a potential danger, a pile of dead bodies in an office that becomes the subject of an uncaring, casual discussion, and an enemy-identifying machine that causes a cacophony of mad unreason between a group of pseudointellectuals.

The cast and director who were working on the play are amazing artists. Ali Kamran, the director of the play is a dream-come-true director for me. He understands my work one hundred percent, and he has a deep understanding and a lot of experience with absurd theater. The cast is a group of incredible, talented actors: Mattye O’Connor, Rae Laine, Nathan Emly, Paul Bisesi, Aubrey Wynn, Benjy Wachter, Sean Orion, and others I didn’t have a chance to ask permission to mention their names here.

A:  I just finished a full-length play, Scenes from Lovehood. It is a two-person play that is like a love poem with Judaism as the background.

Now, I am working on expanding my ten-minute play The Shoe and the Dog and the Window. This experimental play touches on the idea of breaking a status quo and expands from there.

A:  It’s rather a memory, not a story, of my paternal grandfather who would entertain his guests by taking a biography or history book from his library and then passionately point out some really controversial ideas that were very radical for his time. As a child, it was inspiring for me to watch him. I believe that my father has followed his example and continued his heritage, and I hope that I can carry it on.

A:  Theater is a cultural tool that can have a great impact, but not if most theatergoers are from an elite group of the society. I would bring the theater to the audience rather than waiting for the audience to come to the theater. I know that is already happening. I would love to see more of that.

A:  I love the complexity of Samuel Beckett’s plays and the brilliant simplicity of Eugène Ionesco’s plays.

A:  Theater that is idea oriented rather than plot oriented.

A:  My plays are on New Play Exchange https://newplayexchange.org/users/37177/katrin-arefy

And my previous productions are listed on my website katrinarefy.com

Found your post interesting to read. I cant wait to see your post soon. Good Luck for the upcoming update.This article is really very interesting and effective.