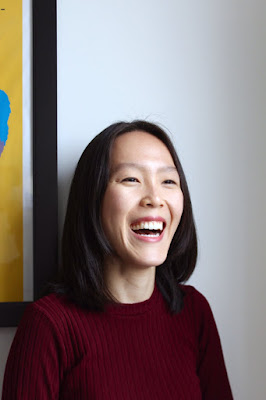 A:  I'm writing this from the Great Pandemic of 2020 so writing has been an off-and-on endeavor, but here are the two on my desk. First off, I'm working on Lost Coast, a seven-protagonist play about isolation, community, and wildfires. I've often experienced that plays that deal with "community" tend to romanticize the very concept. But communities can be difficult, fractured, are not always the comforting place of rest we envision. I'm trying to capture both the beauty and ugliness of the individuals that form imperfect communities. I've been developing at Nashville Rep's Ingram New Works and they've been wonderfully supportive.

The second project is called BUST (working title) that I am co-creating with director Bryn Herdrich with support from Soho Rep's Writer/Director Lab. It's about the concept of money, the myths that keep money alive, and our relationship with wealth. Our hope is that we will get to present something from it in a theatre in early 2021 so stay tuned. Oh, and one fun fact (related to the play) - did you know that approximately 6,000 tons of gold currently sits in the Manhattan bedrock storage of New York Federal Reserve?

A:  Well, the pandemic will probably change MANY things about theatre, though we don't know what its lasting impacts will be yet.

As it stands, I would personally would like to change many things about theatre (accessibility, structure, cultural and ethnic representations, etc), but if I HAD to pick ONE -

I would change the industry's idea of artistic development for early-career artists. It's very much, "get us a script, we'll do the cheapest/least committal reading and see what it is." Nothing wrong with that model, but it's sad that it's the most prevalent model. And because it is the most prevalent model, it encourages a very specific kind of plays to be written, ones that thrive in that environment. I would love to see more diversity in the kinds of plays we see on off-Broadway. That means that the theatres may need to rethink the kinds of resources they make available to the artists. And allow artists to dictate their needs without worrying about how this will affect their relationship with the organizations. Soho Rep and EST/Youngblood come to mind as places that are doing a good job of providing meaningful support, despite the limitations.

A:  Physical theatre came before playwriting for me and the physical body and world is still the main consideration in my writing process. The founders of Theatre de la Jeune Lune are one of my perennial sources of inspiration. They did the co-Artistic Director thing before it was a thing. The way they worked, and the kinds of work they created forever changed the landscape of theatre in the city.

A:  Theatre that truly takes a comprehensive consideration of all of its elements. I've been watching Met Opera's live stream the past few weeks, and I was able to catch Benjamin Britten's Peter Grimes, a libretto adapted by Montagu Slate from the narrative poem, "Peter Grimes", in George Crabbe's book The Borough. It was maybe the first time where I saw an opera use both its sound, musicality AND text to create a complete theatrical rendering of a fisherman pushed to the edge by his community. Just because it's an opera, it can't rely on beautiful sounds all the time.

It's the same for the theatre. It can't just rely on spoken text. When I see a work that shows the people so organically embodied with the text, I become enthralled. My quarantine brain is forgetting some, but some recent shows I loved are Passage, A Strange Loop, Fefu and Her Friends.

A:  I think giving advice is tricky because everyone "starts out" in such different situations. But what I found to be most helpful for me is to really focus on my point of view, my perspective as a theatre artist. Especially in New York, going to shows and interacting with all sorts of artists, it can be disorienting. But as much as possible, focus on where you are coming from and where you want to go as a writer. What do you want to know more about? What is that weird, untold, mundane thing that captures your attention? If you find it fascinating, there is a good chance that others will too (I'm stealing that sentiment from Haruki Murakami). Then obsess over it and write about it.

A:  It's still quarantine season so things are so up in the air but hopefully, people can turn into a virtual Zoom reading of Lost Coast, arranged by EST/Youngblood. BUST will also have a workshop showing in early 2021 at Soho Rep! Come join the fun that is dismantling our financial systems.

What a contagious smile/laughter! I love it!

We are the best website for providing Programming Assignment Help. Our years of knowledgeable team experts will help and guide students regarding their assignments.

Great content & Thanks for sharing with oflox. Do you now what is Voice Search SEO