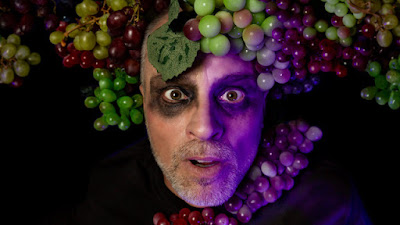 Q:  Tell me about "Planet of the Grapes Live:

A:  “Planet of the Grapes Live” is the result of what happens to an artist during a global pandemic. As soon as lockdown began, I immediately pivoted my solo show and my family-friendly show to become interactive, live, digital presentations. I wound up doing over 100 of them. It was…a challenge, but a fun one. During that time I was afraid I wouldn't ever create anything else again, so I spent a lot of “worry time" on Rockaway Beach, just thinking. I had always been obsessed with the original 1968 “Planet of the Apes” film. While I was working in London on my flop musical “Desperately Seeking Susan,” I always passed a wine shoppe called “Planet of the Grapes.” I’m not usually a pun person, but that name always stayed with me.

I started playing around with some ideas and sketches of how to bring this thing to life and stumbled upon the history of toy theater which originated in the Victorian era. It was a way for people to literally bring theater into their homes. It seemed like the perfect time to revive that movement, since people weren't able to leave their homes and were craving theater. I started building a tiny stage in my tiny apartment and did some tests and ran them by my frequent collaborator Michole Biancosino and we decided it was something we wanted to dive into. I learned a lot about puppetry and I used some of my skills as a set and lighting student to re-create a tiny theater. I then added the sounds of an audience entering the space and an intermission and the program, and suddenly we had an actual theater event that people could experience from the comfort of their couches.

When I first started working on it, it was really just gonna be a short, silly thing that made people laugh. But as I dug through the screenplays of the original film and saw that Rod Serling was a big part of the development of the screenplay, I became obsessed. The film is not just about some astronauts who land on a planet where humans don't speak. It's about global issues like treatment of animals, the caste system, and mankind’s irresponsible treatment of our own planet Earth. We realized that this story had an important message, and that we could make an impact by telling it in a new way. It has now played virtually around the world over 50 times (live digitally) and we had a fabulous virtual run for the Edinburgh Fringe this past August which brought in a whole bunch of great reviews and an award. So, this next step is now adapting the digital version for the live stage with live music and special effects. We are really looking forward to being back in front of a live audience!

A:  I'm not really working on anything else right now because I'm completely committed to bringing “Planet of the Grapes" to stages here in NYC and beyond. We're thinking about things like technical elements and also really important things like how to transport a tiny theater stage with characters, sets, lights, and sound to venues around the country and the world. I can't tell you how many trips I've taken to the Container Store to find the right vessels to store all of this stuff in.

Q:  Tell me, if you will, a story from your childhood that explains who you are as a writer or as a person:

A:  It amazes me and my friends and family that I wound up becoming a writer/performer. I never saw a play until I was in junior high school. But as a kid in Queens, I really loved television and had a fondness for anything that was comedic. I was also into “old movies” as a kid. In the Tri-State area, we had something called “The 4:30 Movie” which showed old movies. I couldn't get enough of these old movies and would beg my parents to let me eat dinner in front of the TV when a good one was on. I also had a neighbor down the street who was older than me who had a camera, and he would shoot little black and white movies in the neighborhood using all of the kids. I really looked up to this guy and I loved seeing what he created. I suppose he was a big influence on my creative life. Once I started seeing more theater in high school, I knew it was for me. I actually didn't start writing until much later in my career, as I had spent so much time acting on stage. I think learning improvisation is what opened my mind up to being a writer. When I became dissatisfied with the types of roles and plays I was being submitted for, I started writing my own stuff. I haven't stopped since. Sometimes I have imposter syndrome - but it seems nearly everyone in the arts has that, so at least I feel like I'm part of a large, somewhat dysfunctional, artistic family.

A:  Just one thing? Ugh. That’s hard. It became clear during the pandemic that there was a difference between Broadway-lovers and Theater-lovers. So many people missing Broadway shows, yet there were so many international artists creating theatrical content - digitally. But, folks were more into those kinds of events if celebs were involved. I think some of the most creative theatrical experiences I've had during pandemic were from digital theater shows. I hope in the future that more Broadway-lovers realize that they are actually theater-lovers and take greater chances on the unknowns.

A:  I am a huge fan of Fringe Festivals. The kind of unconventional work that I've seen in these festivals around the world is more creative and thought-provoking to me than most mainstream theater. If I could spend my life traveling around the world only seeing what artists create at fringe festivals, I'd be very content. I guess what I'm saying is, I like theater that delivers content that the audience is not used to. Content and subjects and methods of storytelling that are unique. I'm always looking for stuff that is "outside the box,” because it not only entertains me and keeps my mind swirling, but it also inspires me to be more creative in expressing my ideas and stories.

A:  See as much theater in as many places as you possibly can. Work with dramaturgs and directors as early as you can. Share your process with your circle as often as you can. Believe in yourself and your ideas as much as you can.