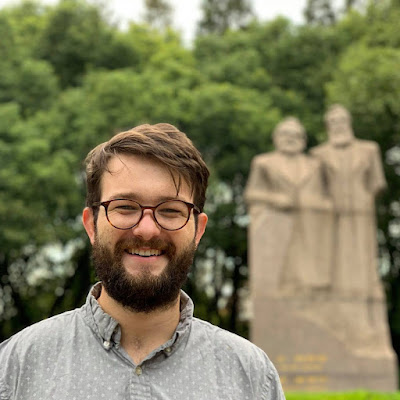 Q:  Tell me about Occupy Prescott.
A:  Occupy Prescott play begins in the fall of 2011, when a libertarian rancher, an anarchist punk, an aging hippie, a radical priest, and a single mother gather in Courthouse Square in Prescott, Arizona determined to fix America. They all agree that the one percent is too powerful, and the rest of us are getting screwed. When they try to get more specific than that, though, they find themselves disagreeing about nearly everything. For me, this a play about how the task of rebuilding the world is both vitally important and...kind of annoying? Boring, even? I spend a lot of my non-theatre time doing political organizing, and most of the time it's a brutal slog. But every once in a while something happens that reminds you that what you're doing is actually really important, and it can mean the difference between someone being pushed out of their neighborhood or not, or getting arrested or not, or living next to a toxic dump site or not. The victories are so few and far between, and to me that means you have to find ways to make the struggle itself worth it. So this play is also about how being part of a movement creates a temporary community, and how intense those bonds can be, for good or for ill. It is very much a piece of political theatre, but more than that it's a character study about how being in a movement changes you. It's about how just sharing space and time with people who don't look like you or think like you can be a deeply transformative experience. In that way, it's also a play about theatre. People often called Occupy "political theatre," by which they meant performative bullshit, but just because something is theatre doesn't mean it isn't true. At least I hope not.

A:  I was part of the 2019-2020 Pipeline PlayLab group, and for that I wrote a play called Red Clay Halo about the Southern Tenant Farmers Union, which was a radical interracial sharecroppers' union that drew equally from Karl Marx and fundamentalist Christianity. I was supposed to have a reading of the play in the spring of 2021, but that obviously didn't happen. There will be a reading of that play eventually. I also have a few other projects cooking that aren't in the kind of shape yet where I can talk about them in a public forum.

A:  This is maybe stretching the definition of childhood a bit, but when I was a senior in high school I saw Teatro Campesino do a play called The Tent of the Underdogs, which was originally performed in 1974. This play is about the struggles of migrant workers in agriculture, and it really opened my eyes to the brutal conditions farmworkers faced at that time, and still face. It also looked at issues of racism against the Chicano community. At the end of the play, the performers encouraged the audience to chant United Farm Workers slogans with them, and I left the theatre really feeling like I wanted to throw myself into the movement. (Incidentally, there is a character in Occupy Prescott who is a former UFW organizer). That spring, SB 1070 was passed in Arizona. This was known as the "show me your papers" act, and it basically deputized local cops to demand immigration papers of anyone brown. I remembered the sense of purpose the play had generated in me, and decided to become involved in the local protests against SB 1070. My involvement was very low-level, just showing up to a half a dozen or so marches, but it still changed my life. I met real-life anarchists and Marxists for the first time, and heard speeches from people directly affected by this bill. This convinced me that political theatre isn't always just preaching to the choir, and that it can absolutely have direct, tangible results in the real world. I don't think I would have gone to those marches if I hadn't seen that play. It is my hope that after seeing my plays audience members feel one step closer to actually taking action to change the world. In Red Clay Halo I have characters questioning why we need to have landlords. Of course, we really don't. Society could function perfectly well without them. If someone sees my play and starts up a tenants union, I think I've done my job.

A:  It's always bothered me that so much theatre is centered in New York. I know I'm doing nothing to help this situation by living in Brooklyn, but I still do think that if half the theatre artists in New York moved to Denver, or Phoenix, or Oklahoma City, those cities would change immediately, while New York would barely notice we'd left. It just feels to me that we're all competing for so few opportunities here, when there's such a need for what we do everywhere else. By that I'm not at all trying to denigrate the wonderful work that is done outside New York, but the disparity in funding and audience numbers and number of artists is very stark. I'd love to live in a world where theatre felt local, homegrown, and relevant to its immediate community. We'd probably need something like a new Federal Theatre Project to make that happen. So if I could change one thing I'd have the government create a program that enabled artists to make a living wage while creating new work grounded in communities all across the country. We've done it before.

A:  I've already mentioned Luis Valdez and Teatro Campesino, but in addition to them I love Caryl Churchill, Tony Kushner, Wallace Shawn, David Henry Hwang, Lynn Nottage, and Adrienne Kennedy. I'd say the common denominator of all of them is that they make work that is explicitly political, but is also grounded in theatricality and character and language. I don't think there is any necessary tension between good politics and good art, and I'm drawn to artists that have both. I certainly aspire to both in my own work.

A:  I've sort of answered that question, but one other thing that excites me is dumb cheap theatre magic. I live a short walk from Target Margin in Sunset Park, and I see everything they do because it's all animated by a really wonderful Let's Put on a Show! energy. They have dance numbers and Party City streamers and magic tricks and I just sit there giggling like a little kid.

A:  I still feel like I'm just starting out, but I suppose I can try to give some advice. I think there are many good ways to write a play. Sophocles' plays don't look anything like Caryl Churchill's, which don't look anything like Arthur Miller's, but all three are great writers. I still sometimes encounter people who offer you the One Right Way to write a play or a musical, and as soon as they do that my brain just starts wanting to poke holes in whatever they say. Musicals have to have a happy ending? What about Little Shop? A protagonist in a play needs to know what they want? What about Hamlet? A play needs a strong central character? What about Sweat? All these rules are just so transparently wrong that I don't think it's really even worth learning them. Read as many different kinds of plays as you can, and then try to write the play you would like to see.

My play The Trade Federation, or, Let's Explore Globalization Through the Star Wars Prequels is available to purchase from NoPassport Press here!

A podcast version of my play Three Scenes in the Life of a Trotskyist is available here!