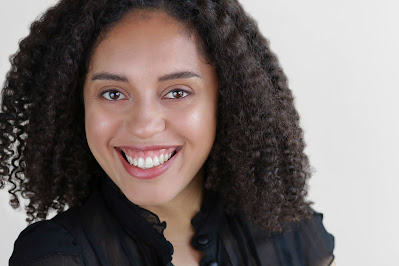 Q: Tell me about Eden in the Sciene In Theater Festival.

A: Eden, a sci-fi play, is the story of a scientist, a doctor, and a patient who experience the transformative joy and terror of a real miracle.

When Eden lapses into an unexplained coma Dr. Luna Del Cielo starts having strange nightwalks. Trusting in new found friend and colleague Sonia Preko, the two women stumble into what they think is a scientific discovery but ends up being so much more.

A:  In June of 2022 I plan to complete my first coming-of-age sci-fi novella “Never Eat Alone”. Based on a real, but short lived, NYC school policy enforcing teachers to eat with their students, the novella is told from the perspective of high school student Tara Santos and her relationship with Izel, her replica. It is a piece that explores self-love, grief, and getting good at disaster through uncanny methods.

Q:  Tell me, if you will, a story from your childhood that explains who you are as a writer or as a person.
How about a fairy tale instead.........

Kiki stared at her reflection in the water bucket outside her hut, focusing her eyes on the slits under her breasts. They were subtle lines in her dark brown skin and almost imperceptible, but she could feel the power that rested underneath them. She knew what it meant. She was one of them, the Azinza. Tears stung Kiki’s eyes and she struggled to breathe, already feeling the effects of her change. She would soon have to go to water and abandon her family, her village, and the person she was.
What will I tell my mother?
Her mother, her whole family in fact, hated the Azinza and considered them to be abominations. If they were to find out that they had one in their midsts they would be devastated and the news would bring shame to her family. They may even be cast out of the village and forced to live in exile. She would have to say her goodbyes quietly, and disappear without explanation. She felt horrible thinking about the pain she would cause by vanishing but it would be worse if they knew the truth.
She tip-toed back to her hut and stopped to gaze at her sleeping family. Her brothers lay on their backs with round bellies rising and falling peacefully. She smiled and kissed them on their foreheads before looking over to her parents, both snoring softly. She thought about all the laughter and love, safety and warmth they had provided and bit down on her lip to keep from sobbing. She decided not to touch them at all for fear that her anguish would wake them up and force her to explain herself. She slipped out into the moonlit night and began her pilgrimage to the ocean.
Once at the beach she stepped mournfully up to the tide and stared out at the thin gold line of the horizon. Dawn was approaching and she was running out of time.
“Kiki?” her mother’s voice said, softly, from behind her.
She jumped in surprise and then froze.
What will I tell my mother?
Her mother held a stern look on her face as she stepped, slowly, towards her. She reached out and cupped her face in her hands, kissed her forehead and then held her. They stayed this way and said nothing as the sky turned a pink yellow from the rising sun.
“Every new moon I will come here and sing so that Oshun will protect you. Every new moon I will sing and hope to see your face,” pledged her mother.
Kiki gripped her mother in a fierce embrace and trembled with fear, sadness, and tears. She felt the heat of a new day on her back and her body began to ache and pull her towards the water. Her time was up.
She slipped off her clothes and walked, naked, into the rush of the waves. The steady heartbeat of the ocean wrapped around her and she barely noticed when her feet ceased to be. She felt the steady thrum of the water pull away from her skin as she rose to the surface to look back at the shore one last time. Her mother stood on the beach, arm outstretched, lonely and strong like a lighthouse.
Though Kiki was never seen again by anyone in her village, every new moon her mother would sing and a great bounty would wash ashore with fish, shells, oysters, and pearls. For a few brief moments before the sun would take its place in the sky, before the moon would rest until its return, mother and daughter would look at each other from across the waves. A lighthouse and an Azinza; arms outstretched in welcome and goodbye.

The above short piece was published in Last Girls Club, a feminist horror zine.

A:  Theater that responds to its time and breaks rules. I'm excited about theater that is investigating theatrical traditions outside of the Western cannon and inventing new ones.