Hi Everybody!  Here is our Christmas Card. 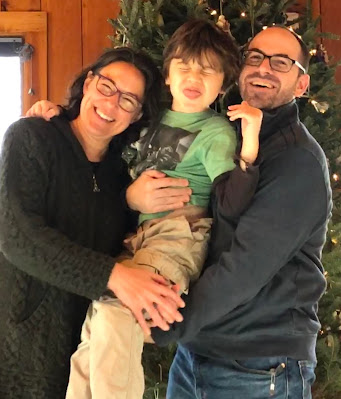 Hope you're well.  We are still pandemic-ing.  Although our son is back at in person school and that is a relief.  I have also been back in person (as much as I ever was) at my day job which means 2 days a week in New York.  And working from my shed-office the rest of the time.
I had a breakthrough case of covid a few months back after being fully vaxxed and was mostly just really tired for a couple of days.  Luckily, I managed to not pass it on to my family somehow.  (Masked and living in the basement)
Writingwise, I finished writing my second YA novel, and wrote half of a Middle Grade novel, wrote 60 one-minute monologues, finished a forty-minute play called 100 Things I Never Told You that I'd started at the beginning of the pandemic, wrote a 20-minute film for some Juilliard students and wrote one full length play.
When I look at that, it's actually a lot of writing, even if I feel like I didn't do all that much.
I did only 10 interviews this year, partially because I think people just aren't into being interviewed right now and partially because it was hard for me.
I read a lot of books this year and quite a few plays but I didn't count them so I don't know how many.
One milestone I hit this year was having a play done 100 times -- a one act that was published in 2015 had its one hundredth production this year.
Also up until this year, the most productions I've had from a full length has been 11 in a single year.  Kodachrome had 14 this year which is kind of amazing during a pandemic.  Most of them are at schools who are still doing work right now.
I had 32 productions this year, not as many as 47 in '19 but more than last year's 20.
These 32 were-- 2 of The Parking Lot, 1 of The Book Store, 1 The Wooden Heart, 14 Kodachrome, 1 Elsewhere (which hadn't been done in 10 years), 6 Marian Or the True Tale of Robin Hood, 5 Clown Bar, 1 Nerve, 1 Hearts Like Fists.
My night of one acts, 7 Ways To Say I Love You had 1 production. 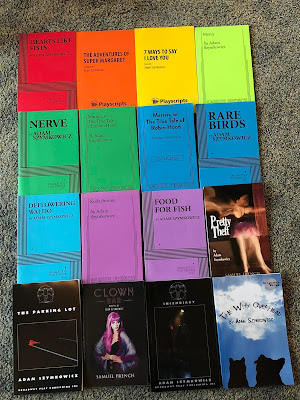