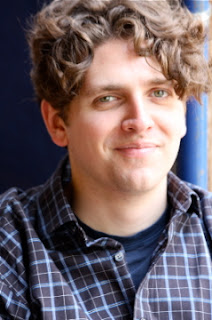 Current Town: I'm writing this from the Twin Cities where I'm a Jerome Fellow this year. But my significant other, our cat, and many of my closest collaborators still reside in Chicago. So right now I have the great fortune of having two artistic homes.

A:  I'm currently juggling a number of projects. I just finished the first draft of a brand new play. It's a taut, intimate three-hander which has proved a nice respite from the more epic projects I've been working on recently. I'm also in the midst of revising my play The Solid Sand Below ahead of an upcoming reading at the Goodman as part of New Stages Amplified. That play follows a somewhat reluctant soldier who is sent to Iraq during the surge only to discover what he considers to be his best self in the midst of combat. The play then follows him back to the U.S. after his deployment and examines what it means to feel like you're at your best in moments of violence and chaos once you return to civilian life. I'm also in the midst of re-writes on a project I'm co-writing with Rebecca Stevens about a sixteen year-old who discovers, when her parents are detained by the FBI, that they are not only foreigners, but also Russian Foreign Intelligence Agents. She then has to try the figure out the truth of who she is and why her parents had her while they remain in FBI custody. The "true" answers to her questions prove to be elusive. We created the piece this past May through a month-long workshop as part of the Chicago Department of Cultural Affairs' Incubator Series, and I'm really excited to dive back into it after working on some other projects. And soon I'm going to start adapting one of my plays into a graphic novel.

A:  When I was a child and my family would all gather to watch movies at home on a Friday or Saturday night, I had this habit of gathering a bunch of "props" on a blanket next to the screen and enacting what I saw on screen along with the movie. I would often recite lines and talk back to the movie. As you can imagine, this habit of mine was very controversial among my different family members. My father is known to have frequently told me "They're paid to talk. You're not." when I did this. Though, of course, that is in no way a larger reflection on what kind of a father he was. He was (and is) an excellent father. Although both of my parents to this day are very frank and unsparing in their assessments of my work. But I think that story captures some part of why I gravitated toward the theater. I learn by doing things, by participating in them, so for me writing plays is not just a profession, but has also become a way of trying to better understand and investigate the world. I will often write plays about people or situations far outside my personal experience. And I admit that when I begin these plays I am seized with this terror that someone will read the play and know I'm a complete fraud or fool. But I embrace that terror and use it to keep me honest. I use the process of researching and writing the play to really listen to and learn from the people and worlds I'm writing about.

A:  There are so many things I'd like to change, but if I had to choose just one I think it would be the way we allow ourselves and others to talk about our creativity. It may seem like a strange thing to choose to change, but I feel like it's connected to so many of the other challenges we face as a theater community in this country. So many artists and companies (quite understandably) go to great lengths to hide their processes from the public, their colleagues, their audiences, their collaborators, etc. And I want to be clear that I understand why so many artists and theaters do this. They only want to put their very best foot forward in order to protect their reputation, their brand. But what happens when we refuse to lay bare the chaos and sloppiness of our processes to the public is that we create the impression that art is something inaccessible, something you can only partake in if you have been imbued with this unique gift, this unique inspiration. When what we should really be cultivating is the idea that theater (and art in general) is something anyone can partake in and even master if they dedicate the requisite time and energy to doing so. It's a scary thought for any artist to confront because it forces us to acknowledge that we are somewhat less special and unique than we might like to believe. But in an effort to protect ourselves and our artistic reputations, we try to create the impression that we're separate from the public, that there is a gulf between us that the public cannot bridge because they do not possess our special, inaccessible gifts and inspiration. And then we wonder why the public doesn't invest in the theater and come to the theater more. I'm on this kick right now of using sports to look at what we as a theater community can be doing better. And people always complain that theater is too expensive to be accessible because it often is. But attending most college or professional sporting events is more expensive than almost any theater ticket I buy. Even the monthly bill for a cable or satellite TV package that allows you to watch your favorite team is more expensive than almost any theater ticket I buy. And yet people are more than willing to spend money they don't have to attend sporting events or watch sports on TV. And why is that? It's at least partly due to the fact that many fans used to (or still do) play the sport they watch. So while they recognize professionals as having mastered that practice, they also feel the sport is accessible to them because they have personal experience with it. And that personal experience gives them a greater appreciation for the process professional athletes go through because these fans tried to hit a golf ball or make a three point shot, etc and know how challenging a skill it is master. So I think we need to ask ourselves how can we cultivate this investment in theater? A big part of it is by talking more frankly and honestly about our processes, how we struggle to get to that final product. The Rude Mechs in Austin do this very well by making workshops of their unfinished pieces big events that are open to the public. When you attend these workshops they are very frank that what you're see is in process and that the final product may not cohere until a year or 18 months later. But by opening up their process to the public they've cultivated tremendous investment from Austin in their work. People may not necessarily be blown away by the initial workshop, but they go back to the next workshop and the one after that because they want to see how the initial kernel they saw will evolve into something breathtaking.

A:  Eek. To me, the term "hero" is a very vexed and dangerous term. I'm someone who tends not to have any "heroes". But there are a number of writers whose work I deeply admire and whose work has indelibly shaped my own. Tony Kushner, Bertolt Brecht, Griselda Gambaro, Stephen Sondheim, José Rivera, Dael Orlandersmith, Juan Mayorga, Sarah Ruhl, Caryl Churchill among others. I would also add to this list all of my professors and colleagues from graduate school. I would not be the writer I am without exposure to their work and unique points of view.

A:  Theater that marries the intimate and epic. Theater that allows us to see how deeply connect personal choices and relationships are to larger social and sociological forces. Work that sheds the mundane. There is a Van Gogh quote that Steven Dietz often cited when I was studying under him in grad school at UT-Austin... "Exaggerate the essential. Leave the obvious vague." That's a philosophy I deeply admire and try to adhere to in my own art. I also love work that tries to tell huge and impossible stories within very tight constraints, work that embraces the relative poverty of theater as a medium and brushes up against the limited resources of theater as a means for sparking ingenuity.

A:  When I was in grad school, Steven Dietz had a framed quote in his office (I'm not sure if it's still there, though I hope it is) by Winton Marsalis. "Praise is the hardest thing to overcome." You never lose anything by being deeply, deeply rigorous with yourself. It may take a long time listening to your work in front of audiences before you develop the finer hearing with which you can instantly tell when your writing has the energy, charge, and momentum that makes an audience lean in. Trust that one day after listening to your work, your actors, and your audiences long enough, it will click and you will suddenly have this sense you never had before. You'll hear every sentence, phrase, or word where your play loses that charge. Once you're able to hear what I'm describing, do not rest until every moment of your play drives us forward, pulses with that charge. No matter how good people tell you it is. You can never go wrong by being your own harshest and most honest critic.

Oh, and, a nice little handy and pragmatic piece of advice... when possible, avoid directly-answered questions in your writing like the plague. Nothing takes the energy out of a scene faster. Let your characters be evasive. Cagey. Things get so much more interesting when you do.

A:  If you're going to be in Chicago in December, please come check out the reading of my play The Solid Sand Below at the Goodman as part of New Stages Amplified. The festival also features work by Tanya Saracho, Philip Dawkins, and Frances Ya-Chu Cowhig, all of whom I know personally and whose work I admire. So please come see everything if you can!

If you're going to be Minneapolis this coming week, come check out PlayLabs at the Playwrights' Center. The festival features work by a number of writers including my friend George Brant.

And here's the url for my website in case you want to read more about what I'm up to...