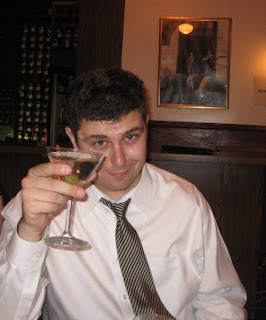 A:  In January, InFusion Theatre Company will produce the world premiere of my play Allotment Annie at Strawdog Theatre in Chicago. It’s a twisted dark comedy about sex, money and murder in small-town America during World War II, directed by Bridgette O’Connor-Harney and starring Kate Black-Spence, Beau Forbes, C.J. Langdon, Carl Lindberg, Mallory Nees and Amy Katherine Rapp, and we have a terrific dramaturg named Jamie Bragg helping the play be all that it can be.

There are also several plays I’ve been working on and perfecting, editing, revising, etc. First is Black Ice Coffins, a play I wrote with writer/poet/actress Elizabeth Kay Kron and based on the true story of a young thief in the early 1960s whose exposure of the Summerdale Station burglary ring scandalized the Chicago Police Department: that particular play, taking place around New Year’s Day 1960 in the meanest places of Chicago is probably the most sordid and nightmarish thing I’ve ever done and is told though a lot of Beat-inspired poetry, much of it written by Kay. Also there’s A Perfect Shade of Skyline Gray, a lush Douglas Sirk-inspired melodrama based on the 1957 disappearance of Molly Zelko and a little-known incident in the life of Robert F. Kennedy. That play had a staged reading as a part of New Leaf Theatre’s final Treehouse Reading Series and I’m currently in the early stages of working on a film adaptation with director Malachi Leopold. Along with that is A Family Emergency, a sort-of epic tragedy about a family slowly disintegrating over ten years, starting on September 11th, 2001; Red Thunder & the Vodka Martini Surprise, a phantasmagoric espionage thriller based loosely on the Anna Chapman spy case; Private Family Conduct, a Greek tragedy about two New York investment tycoon heirs whose romantic and business endeavors lead to destruction and death in fall 2008; and finally Junk Girls, a play about three young women of extraordinarily different backgrounds who get stranded in a small Minnesota town by a snowstorm while on a mission to inform a sullen bartender that her husband’s been killed in Iraq. There’s also a piece called Riot Call, a play about Chicago’s 1919 race riots and commissioned by The Inconvenience’s Head of Theatre Programming/actor Walter Briggs, who directed a staged reading of it at The Den. That one I’d especially like to get off the ground due to the elemental power of the bloody and horrific true story that it is.


The only thing I’m currently trying to finish, i.e. get to writing “The End,” etc. is an adaptation of Charles Dickens’ The Chimes, in many ways a quintessential Dickens Christmas story, but I’d like to move the setting to a run-down V.A. hospital on Chicago’s South Side in December 1972. Hopefully I’ll have that done in time for us to do a reading of that in time for Christmas this year. I like doing adaptations because it’s an incredible challenge, to take something that exists in one medium and try and make it successful in a totally different one without diluting its essence but still somehow making it your own work and caring about/loving the characters like you would your own.

A:  I don’t know if there’s any one story or moment that made me want to be a writer, any kind of James Joyce-style epiphany for me that way, because I think it’s what I always wanted to be, since I was old enough to read I wanted to write, I wanted to act, to tell stories, to draw cartoons, anything that involved creating or fantasizing captivated me. In junior high I would do presentations/book reports as this idiotic character named Roger Rawlings, a pompous twit with a faux-English accent doing a thinly-veiled Masterpiece Theatre rip-off, and I would actually need time to “set up the room,” give direction to the hapless costumed “actors” I pressed into playing parts and play the classical music, etc. There would always be a prelude with Roger cheating in chess and his enraged but debonair opponent knocking him senseless with the book in question. Thinking back on it now, I’m surprised the other students in Mrs. Foskett’s Sixth Grade English class didn’t get together and beat me to death, though I’m sure it was discussed. But I was hooked, I liked writing theatre. My father, a lawyer for thirty years and now a judge, used to tell me tales of the various ne’er-do-wells and lowlifes he had known and sometimes represented, arch-criminals, thieves, rapists, murderers, etc. and I was always fascinated by the luridness of it all: the more sinister and unsettling, the more I loved it, and asked time and time again for the stories of the maniac who sabotaged his cell padlock by using an unmentionable substance, the deranged woman who stood on a Joliet street corner holding a box of Special K to the sky, the murderer sitting on a prison toilet asking if anyone wanted a bite of his sandwich. It’s the sick side of life that fascinates me, which is one of the reasons why Lenny Bruce’s autobiography How to Talk Dirty and Influence People became my artistic and political awakening, a book I read over sixteen times in one lonely week.

A:  If you’re a theatre artist, especially a playwright, you need to be a combination smack dealer/Baptist preacher/pimp to make it. Your work has to promise narcotic thrills, spiritual salvation and raw earthy pleasure, and there are so many plays, especially new plays, that don’t pass muster. There’s too much academia in theatre, where new work is constantly being asked if it makes the audience think about Important Issue of the Day or is it liberal enough or the “right time” to produce it or whether it helps Teach A Valuable Lesson instead of the question “is this play fucking awesome?” If it isn’t, why not? There should be a rawness to theatre, a sense of danger and an affirmation that life is worth living and that telling stories is magnificent, and it doesn’t matter if you have a budget of a million dollars or a tarp in a backyard, if the story you’re telling isn’t epic then why are you telling it?

A:  First and foremost, Ben Hecht, because he brought real-world journalism into theatre and then wrote or co-wrote some of the greatest screenplays of all time (and read the anthology A Thousand and One Afternoons in Chicago if you haven’t already, no one else had so much game with printed prose.) William Shakespeare, Tennessee Williams, Tom Stoppard, David Mamet, August Wilson, Tracy Letts, Martin McDonough, Jules Feiffer, and poetry-wise I need to include Allen Ginsberg and Sylvia Plath. Honestly a lot of the writers I owe the most debt from are from film: in this category I’d put Billy Wilder, Preston Sturges and Ernst Lubitsch as three of my heroes for how beautifully their language flowed from their characters’ lips, and because each man was a superb writer-director.

A:  Raw theatre, violent theatre, sexy, sensual and smart theatre, potent and powerful theatre, the plays that scare you, the plays that make you throw up, the plays that make you angry and the plays that turn you on. August Wilson’s Seven Guitars, the moment when the characters sit around a table and talk and you want to chime in, the theatre where it seems like the world’s richest conversation. Plays like Equus and Credeaux Canvas, plays with hushed intimacy and bold physicality, raw lust and the yearning for more. Plays with true hunger…of the characters and the artists behind them. In a word, the hunger is exciting. Because it’s universal, and it’s real.

A:  Write the play you’re dying to write and fill it with your soul and everything you are and work on it until you’re bone-tired and spiritually exhausted and when you go to sleep, you hear your characters speaking. That’s when you know you’re a playwright. And remember, theatre is always “we.” Nobody but nobody creates a play alone. Make friendships with as many talented actors, designers and directors as you can, do readings, submit to anything and everything, read Moss Hart’s Act One, read it again, see as many plays and movies as you can, read the reviews when you can’t afford the shows, get a day job that doesn’t make you want to kill yourself, and hustle your work. I know “pimp out your children” is usually considered bad advice but that’s what playwriting is: you created something, and now you gotta make it work for you.

A:  My play Allotment Annie, an InFusion Theatre production, runs January 3rd through February 3, 2013. Thursdays through Saturdays at 8:00 pm; Sundays at 3:00 pm, at Strawdog Theatre, 3829 N. Broadway, in Chicago.
http://www.infusiontheatre.com/currentseason.htm