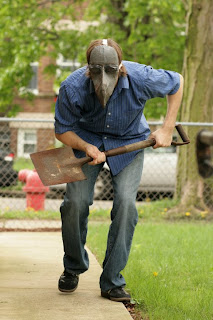 Hometown: I was born in Camden, New Jersey, moved around a lot until middle school, then pretty much grew up in New Port Richey, Florida before attending college at FSU in Tallahassee.

A:  I developed a play over the summer with Red Tape Theatre about the Jersey Shore shark attacks of 1916, which are the first documented shark attacks in American history. In the script, I try and remain somewhat historically accurate while using the attacks as a springboard to examine how people deal, or don't deal, with their own personal fears. The shark is an actual character, but in a good way. I hope. So yeah, I was really happy with it and am chipping away at a next draft before I send it out.

Q:  How would you characterize the Chicago theatre scene?

A:  Scrappy. Adventurous. Surprising. I'm always amazed at just the sheer volume of good work that's being done here, particularly in the storefront world. It's been said countless times before, but Chicago truly has a balls-to-the-wall sort of attitude when it comes to theater. Also, you'll see actors, designers, and directors work on a show at one of the bigger theaters (Steppenwolf, Goodman, etc.), then do something at one of the fringe companies around town. It happens more than you'd think, and that's always cool to me.

A:   I was a real skinny kid, so when I was 15 or so, I wanted to start lifting weights. My Dad had this workout book that had pictures of people demonstrating how to do each exercise. One of the photos was for a dumbbell rear deltoid row, which you're obviously supposed to do for each arm. But the picture only showed someone exercising their left arm, so that's the only arm I worked out for the next couple months. One day, my Mom got worried because I was standing all crooked. I had scoliosis when I was 6, and she thought it had come back. Upon closer examination, my parents discovered the crookedness was due to my one freakishly large lat muscle. I mean it wasn't really that big relatively speaking, but it was like twice the size of my other lat muscle, which was basically nonexistent. After telling my Dad about it, I learned that you're supposed to work out both lat muscles and not take books too literally. That movie Lady In The Water is really terrible, but Freddy Rodriguez plays a guy who only works out one side of his body, which I think is pretty funny.

Q:  If you could change one thing about theater, what would it be?: Hmmm. That's a good question. I'll probably smack myself later for saying this, but I don't think I'd change anything. I know there's a lot of crappy stuff out there and maybe some bad trends, but there's also, at least to me, never been a shortage of good theater to see. That applies to pop culture in general. People always say this sucks or that sucks, or this is what's wrong with such and such these days. But at the end of the day, I always think it's a good thing when so many people are creating art, and that there's always been a berth of culture to discover. In fact, one of my biggest fears is that I won't discover all the wonderful art that's out there before I die. It's really overwhelming in the best way possible. Sorry, that sort of got away from your original question, but I always hear people bitching about what they think is wrong with the theater scene or movies or the music industry, and to me, that's just silly. Yes, it sucks that what you may view as low-brow or terrible art gets the success and the attention, but it also shouldn't keep you from seeing or doing what you love. And there's been plenty of great things that have achieved mainstream success over the years.

Actually, you know what? Theater should be cheaper. That's the one thing I'd change. I know it's not practical, but in a perfect world, it would never cost more than $20 to see a play.

A:  Oh wow. Ummm....Martin McDonagh, Paula Vogel, Conor McPherson, Christopher Durang, Adam Rapp, Craig Wright, Sarah Kane. I actually really dig Rebecca Gilman. I didn't think she'd be the sort of writer I'd be interested in, but my girlfriend start plowing through a bunch of her plays and recommended them to me. Spinning Into Butter, Boy Gets Girl, The Crowd You're In With, The Glory of Living––those are all great. That last one has an awful title, but I think it's an incredible script. I didn't like Dollhouse very much though. But for the most part, I think Rebecca Gilman tackles social issues in a really complex and interesting way. And I'm not someone who usually digs overtly political theater. I feel like she often gets a bad rap because students overdo her monologues and scenes in college acting classes. But like I said, I was pleasantly floored by her stuff.


Let's see, who else? I've only talked about playwrights so far, which I guess makes sense. I should probably throw some actors or directors in there too. Oh, the Handspring Puppet Company for sure. Jesus, they're good. And Trey Parker and Matt Stone. I've only heard the soundtrack to Book of Mormon and haven't had the pleasure of seeing it yet, but I'm a South Park fanatic, and I love the theatricality and clear obsession with musicals that they've always brought to their work. And while I of course don't know them personally, they seem to just do whatever the hell they want without any consideration of what people will like or get offended by. And I think that's very important.

A:  I like all sorts of things, but I always get excited about plays that tackle unrealistic things in a realistic fashion, particularly fantastical and paranormal subject matter. My favorite author is Stephen King. So that should say a lot.

A:  It sounds super corny and I'm by no means an expert on playwriting or anything really, but just trust your gut. When starting out as a playwright, it's so easy to get caught up in the technicality of format, stage directions, etc. Just write what comes to you and don't feel hampered down by any sort of rules. The beauty of theater as opposed to other mediums is that it's so flexible, yet challenging. Embrace that.

A:  I'd actually like to plug a show from my theater company, Tympanic. We're currently running a play by Brooke Allen, whom is just a killer, killer playwright. It's called Ruby Wilder, and runs through October 28th at Teatro Luna. It's sort of a revenge tale, but like a really subverted and unique take on the revenge tale. It's spooky, sad, surreal, and many other words that begin with the letter "s." Seriously, it's just great and I'm really proud of all the designers and performers who made it a kickass show. Actually, I should add them to my list of theatrical heroes: Brooke Allen, James D. Palmer, Joshua Ellison, Emett Rensin, Casey Bentley, Dustin Pettegrew, Brian Berman, Maxwell Shults, Charlotte Mae Ellison, Chrissy Weisenburger, Paige Sawin, Christine Vrem-Ydstie, Joshua Davis, Alex Kyger, Sean Thomas, Chris Acevedo. Phew!

But yeah, they all rock and if you're reading this, you should check out that show. More info at the link and below!