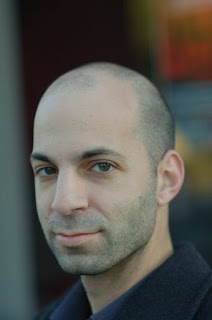 A:  I’ve got about 800 new projects. I just finished a new play, TRUE BELIEVERS, about a disgraced Astrophysicist who teams up with fundamentalist Christians to write a biblically-based Astronomy Textbook.

Q:  Tell me about the Edgerton Foundation New American Play Awards and the two plays you are having produced as part of them.

A:  The Edgerton New American Play Awards are grants given to theatres to help with producing new work. The theatres apply for them, and then the Foundation selects the winners. They’ve had a pretty good track record for picking the most-heralded plays of the year. Unbeknownst to me, both of the theatres producing my plays in 2012, The Purple Rose Theatre in Michigan and The Phoenix Theatre in Indianapolis, applied for awards independently. Both of them won, which was quite a shock to me.

The plays I had selected really couldn’t be more different. WHITE BUFFALO, which ran in the spring at The Purple Rose, is the story of a miracle birth on a small farm in Wisconsin. CURRENT ECONOMIC CONDITIONS, which is a comedy about a 20-something returning to live at home after losing her job, played at the Phoenix.

I was honored to receive both awards, but I only learned about it from Google alerts! Funny.

A:  Like most children of the eighties, I spent a great deal of time in front of the television watching cartoons. Most of that time I was violently annoyed that the heroes always seemed to win and the villains were always morons. I was usually yelling at the screen for the villains to simply get their entire gang together (why did Skeletor only choose one of his henchmen for a task? Send everybody!) and then pick off the heroes one by one. I spent a lot of time diagramming how this would happen, and playing out scenarios in my mind where the good guys were captured and murdered and the bad guys won. I don’t think I was really an evil kid, but without getting too pretentious about it, I think I was striving for narrative complexity and actual danger. The preordained happy ending drained the drama out of everything. I guess that’s why I like writing plays, where the outcome is often in doubt and not always happy, and probably why I also like Game of Thrones.

Q:   If you could change one thing about theater, what would it be?

A:  Just one thing? I’d like to confront the mindset of New York City as not only the center of the theatrical world, but the only place where important theatre happens. There are many great regional theatres in America producing outstanding work (Chicago, Seattle, Minneapolis, DC, etc…) and there are certain publishers who won’t even look at plays that didn’t play in New York. This may seem like a small thing, but it undercuts a play’s ability to live after its first production, if it premiered in a smaller market. It’s hard enough making a living as a playwright, but when your career seems arbitrarily defined by your ability to land a New York production, it makes it even harder. I don’t like to whine, but there is excellent theater being done outside of New York, and making it unpublishable and unproduceable is a shame.

A:  David Lindsay-Abaire, Christopher Durang, Eugene O’Neill, Shakespeare, Paula Vogel, Sarah Ruhl, I could go on and on…

A:  I like theatre where the situation is clear but the outcome is in doubt and the path is surprising. I know that’s vague, but it’s hard to be specific about this entirely. I think a lot of theatre out there now is intentionally obscure and atmospheric rather than dramatic.

I also like huge theatre. Theatre that takes risks, that has twenty people on the stage, and deals with enormous, world-shaking themes. You know, the kind of stuff that’s almost impossible to get done.

Q:   What advice do you have for playwrights just starting out?

A:  Hook in with a theatre group of your peers. It’s so hard to be sitting alone somewhere, emailing out stuff for eternity and listening to silence. You need to be part of a community of like-minded individuals. Get together with your friends and produce your own work. It’s not that expensive to rent a miserable little dive, charge a few bucks at the door, and put on a show.

A:  My newest play, MILES AND ELLIE, will open June 20th at the Purple Rose Theatre in Chelsea, Michigan and run through August 31st. (a 77-performance run for a world premiere! It’s such a joy to work with them. From there, it will move to the Phoenix Theatre in Indianapolis and then the Montgomery Theatre outside of Philadelphia. Playscripts will be publishing my 48th play, A BRIGHT SWARM OF BEETLES, about the life of Soviet playwright Mikhail Bulgakov, early next year. Also you can check out my website at www.donzolidis.com

I agree with you, Don, on so many issues--- big theater, New York does not have exclusive rights on all the important theater in the country, and Skeletor must have had a thick skull, because he never won.
Nice interview, Adam!