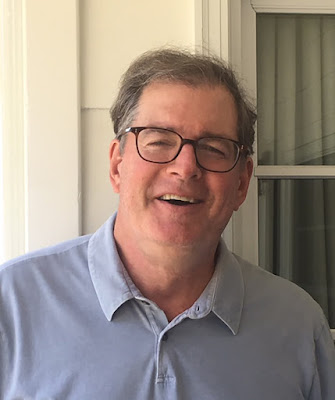 Hometown:  I grew up in Storrs, CT. It’s a university town about half an hour from Hartford. My dad was a professor at the University of Connecticut. My mom worked several jobs – including bank teller and school teacher. She was also a social activist.

Q:  Tell me about Our Man in Santiago.


A:  In high school, I knew I wanted to be a writer. So I always clipped interesting magazine and newspaper articles. I guess it was instead of keeping a journal. At first, I thought I’d wind up being a journalist – which I was for a couple of years after college – but then I decided I’d give Hollywood a try. I’ve been out here for 36 years, the last 28 of which I’ve managed to make a living as a TV writer. Those yellowed articles have come in handy once in a while during that time – never more so than when I decided to write a play about Salvador Allende.

Gabriel Garcia Marquez wrote a piece for Harper’s in 1974 which discussed the overthrow of the democratically elected leader. In the article Marquez referenced a plot hatched by the CIA to get rid of Allende in 1970. The CIA assembled a couple hundred operatives who were experts in government overthrow. They were supposed to fly to Santiago to help the Chilean military oust Allende. Their cover was as a Navy Glee Club. Unfortunately, they had to scrap the mission when they realized that half the operatives couldn’t actually sing.

I thought this was a perfect blend of human ineptitude and the U.S. always thinking they know what’s best for other countries. Our Man In Santiago takes place three years after that fiasco. When it comes to writing, I inevitably end up finding the humor in most situations. So even though the ouster and eventual death of Allende was terribly tragic, I also thought the situation lent itself to satire, as well as dark comedy.

A:  I’m currently an executive producer and writer on the NBC/Netflix show Good Girls. I’m also noodling a couple of other ideas for plays.


Q:  Tell me a story from your childhood that explains who you are as a writer or as a person.

A:  I don’t know that there’s a particular story that can explain who I am. I will say that I lost my dad when I was 14. And I think that greatly affected me. My mom did a wonderful job raising four young kids on her own. But as helpful as people were, there were some folks who also tried to take advantage of her – mostly in financial ways. It made me a little cynical towards human behavior. I think that’s translated to my writing and my general outlook on life. Although I’m always trying to be less cynical. Unfortunately, current events have made that very hard!

Q:  If you could change one thing about theatre what would it be?

A:  I would want plays that are more about characters and less about ideas. When ideas take over, I’m bored to death.

A:  Alan Ayckbourn, Martin McDonagh and Arthur Miller. I love the characters that Ayckbourn and Miller have created and I love the chances that McDonagh takes on stage. My admiration for these gentlemen goes a little bit towards what I was saying above. Ideas do percolate through their plays but they’re not front and center.

A:  Probably the same thing that excites other theatre-goers -- anything with interesting characters that tells a good story. I saw a production of Network in New York last year. Given that the play was based on a movie that’s over 40 years old, I had low expectations. But it was ingeniously staged and the characters were really compelling. I loved it.

A:  Have something to say and concentrate on creating fun and interesting characters. And remember, your mission is to entertain people, not to teach them.

A:  Our Man in Santiago runs at Theatre West from March 13 thru April 5. Come check it out! Tickets at http://theatrewest.org/our-man-in-santiago/

As reported by Stanford Medical, It's really the SINGLE reason women in this country live 10 years more and weigh on average 42 lbs lighter than us.

(And realistically, it has totally NOTHING to do with genetics or some secret diet and EVERYTHING related to "HOW" they are eating.)

Really very happy to say, your post is very interesting to read. I never stop myself to say something about it. You're doing a great job. Keep it up.

This article really contains a lot more information about This Topic. We have read all the information some points are also good and some usually are awesome.

This article really contains a lot more information about This Topic. We have read all the information some points are also good and some usually are awesome.

Thanks for the Nice and Informative Post. This article really contains a lot more information about This Topic. We have read all the information some points are also good and some usually are awesome. Great post I would like to thank you for the efforts you have made in writing this interesting and knowledgeable article.

Thanks I really happy found this website eventually. Really informative and inoperative, Thanks for the post and effort! Please keep sharing more such blog.Visit Us:- https://www.fiftyshadesofseo.com/

Really informative and inoperative, Thanks for the post and effort! Please keep sharing more such blog.

Thanks for the post and effort! Please keep sharing more such blog. https://www.victoriasecretgiftcardbalance.com/

This is a Very very nice article. Everyone should read. Thanks for sharing. Don't miss WORLD'S BEST Shayari

Waterproofing is used to guard against the entry of water into underground and submerged systems (basements and underground areas of buildings, transport tunnels, mine shafts, coffers, etc.). And waterproofing contractors in Bangalore the caisson, too).In hydraulic engineering, it is used for protection against water infiltration of retaining systems (dams, aprons, upstream paddle blankets, and core walls); it is often used for protection against leakage in agricultural or drainage operations (canals, tunnels, and other water conduits, basins, settling tanks, and storage tanks).

Your blog is filled with unique good articles! I was impressed how well you express your thoughts.

If you want to promote your business and want to improve local visibility of your business in the UK then list your website or company details on these 100+ [Free] UK Business Listing Sites List 2021, If you do then, I am sure that this off-page SEO activity will help you to get higher rank in Search Engine and drive more traffic on your site.