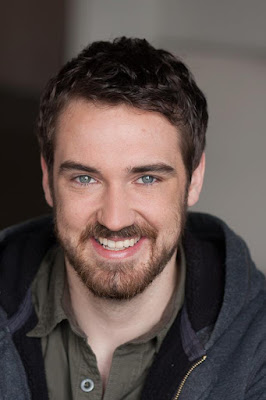 Current Town:  Brooklyn. I’ve been living in NY for the last 11 years. Right now, my whole family is quarantined on one side of the country, and I’m under self-quarantine on the other.

Q:  Tell me about your show that was cancelled because of the coronavirus:

A:  The play is called Unstuck in Time. It was my second full length to ever be fully produced, by five days. I’ve had tons of short plays produced since I started writing, but these two were the first full lengths. The first was called The Part of Me, which was produced at MadLab in Columbus, OH, which they are still figuring out how they want to proceed for the rest of the run; they’re thinking about putting it up on YouTube.

Unstuck in Time follows Billy as he travels his timeline, trying to find a way to save the life of his wife. There’s kind of three threads that you are following in the show: his relationship with his wife in the deep past and how they fell in love (1950s), him processing his grief with his children after his wife has died (1960s-70s), and his present-self trying to find a way to change his past, and save his wife (1992).

The inspiration for it came from the loss of my grandparents, the loss of my uncle in law’s father, a little bit of Marvelous Mrs. Maisel, a bit of the final season of Legion, a bit of Arthur Miller, and a bit of Doctor Who. All these things came together in what is my tenth full length play I’ve ever written, and my second full length produced.

The production was being done by No Frill’s Theatre Collective, a friend’s theatre company in NYC that I’ve worked with the past two seasons of their short play festival. I honestly consider myself very lucky, as I had an opening for both full lengths before we had to shut the doors. So many playwrights didn’t even get that opening and just had to face their shows being cancelled or postponed.

A:  I just wrote a short play for the Covid-19 bake-off about a guy who breaks into a church looking for supplies, and a janitor who pretends to be a priest. One of the elements in that bake off was “a moment of mass panic” so I thought I’d give my characters a (Catholic) mass to panic during.

I am also working on a screenplay about a 17-year-old girl at a Bible Drill competition. The drive of the screenplay is she’s competing to win this Bible competition and her “error” (if we go by Aristotle) is that she feels like she has to keep performing, doing things, at all times or else she’s a failure, an “error” that I feel strongly myself. I’m just fifteen pages in, but I’m feeling good about it.

For my next full-length play, I’m still working out the details. It is a horror play which plays with sleep paralysis and depression, set on a king-size bed. I had just seen Lucas Hnath’s The Thin Place, and it got me in that horror mood. Still working out the arcs on this one, but if I can scare myself, I’ll consider it a success.

A:  Growing up, my family would take me to the Oregon Shakespeare Festival. There were a series of traditions that we observed, including an initiation where we would make the new comer drink out of the water fountain in the town square that shot out the worst water anyone’s ever tasted (they might have fixed that by now).

I remember my first play I saw there, there was this sound of a rattlesnake repeated throughout. That sound stuck in my head, and got the gears of my mind working, and eventually I think a guy got fully nude, and I was like “holy shit, you can do this in theatre?” At the time I thought Theatre was “Annie” and “The Sound of Music”, but here was this play, that blew up everything I thought you could do on stage. And I think it was the first time I seriously considered being a writer, because if a play could affect me like that, then maybe I could do the same for someone else.

A:  The audience. Too often I go to a play and I’m in an audience full of elderly white people. I saw “Collective Rage: a Play in 5 Betties” a couple years back, and I was laughing uproariously (as one should, that play is one of the funniest I’ve ever seen), and all these older white people were turning around to glare at me. Apparently, Lin Manuel Miranda has had similar experiences, and I’m sure many theatre goers with unique laughs have as well. So much of Theatre is written to be enjoyed by the masses, but because Theatre’s don’t really have a safety net (as I think we’ll see even more during this Covid-19 crisis), they have to jack up the prices and the people who can afford to go are the ones who see going to the theatre as a status symbol. As a writer, I want young people seeing my plays, I want to reach populations who don’t go to plays often. I want Theatre to go back to being for the masses.

A:  Edward Albee, Simon Stephens, Sarah Kane, Eugene Ionesco, and Martin McDonagh are the big ones. I find myself admiring Arthur Miller more the older I get. He’s got excellent scaffolding holding up his plays and Unstuck in Time has some things I borrowed from him.

Out of newer writers, I enormously admire Branden Jacobs-Jenkins, Halley Feiffer, Noah Haidle, and Jen Silverman. There’s something to be said of having a strong voice, and I feel like I could identify each of these playwrights just by the way they write.

A:  Theatre that keeps me engaged. Theatre with strong scaffolding that says something or asks a question I had not considered before. Theatre that can make me laugh and cry within minutes of each other.

A:  Read plays that excite you, read theatre theory to know how they work, and submit to everything. I jump started my career by trying to amass 100 rejections in a year. In total I got 130 rejections, but over 30 positive responses (semi finalists, finalists, productions, awards, etc.).

A:  If you want, you can check out some of my plays at https://newplayexchange.org/users/1696/kyle-smith