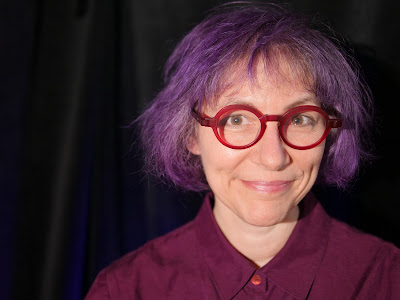 A:  FUKT was written in a few days from a prompt from Aaron Sawyer when he was the AD at Red Theater Chicago and ran the Write a Play a Day for the month of November back in 2017. For anyone who has forgotten what happened in October of 2017, a lot of women came forward in the news with histories of sexual abuse, and the world questioned their veracity.

I like to write fast, especially hard material, and then revise slowly. I think it's important to get to the end of the arc and then figure out what's missing. It feels more honest, unconscious and unplanned. The prompt was "Self as Villain, No 4th Wall." Most of the play just fell into my head the minute I opened the prompt on October 31st. The first reading was November 9th at the Dramatists Guild Foundation with the 29th Street Playwrights Collective. I was afraid if I didn't get it into the world in front of some colleagues, I would hide it away forever.

FUKT is a dark comedy about my own personal journey healing from traumatic memories. It's meta and immersive. It sits between Slave Play and What the Constitution... I developed it with New Circle Theatre Co and Dixon Place. I appreciate all the love it gets on NPX. FUKT was a finalist with BAPF and Unicorn. I'm producing it at The Tank in NYC this fall. It will live-stream and be live in person. So anyone can have access. October 27 - November 13th.

A:  I'm working on a commission from Experimental Bitch about the history of medical misogyny. Tanya's Lit Clit is a phantasmagorical musical - a comedy with ballet and burlesque - about autoimmune disease and how women, especially Black women, are mistrusted by the medical establishment. I'm also working with EmptyRoomRadio.com on Tamar (The Two-Gated City) about raper culture in the Bible, in particular about a woman who isn't heard in court.

A:  I fell in love with theatre early. As an abused autistic child with chronic illness, I took everything literally. So when I saw TinkerBell healed from collective applause, I realized, and fully believed, and still believe today, that theatre holds a kind of magic that gives audiences agency to create our own transformations. I had to find a way to do that.

A:  Access! Who gets to tell the stories that create the culture we live in? Who gets to decide who gets to tell these stories? I am part of a lost generation of women who are never taken seriously by the gatekeepers. Lit managers look right past me. It's extremely disheartening. I'm a member of the advocacy organization Honor Roll! to try to change how older female artists are seen. If a theatre takes public funds, it should have a mandate to represent the lived experiences of its public. Why must we watch the same revivals over and over again? How does that provoke change?

Q:  Who are or were your theatrical heroes?
A:  too many

A:  I love theatre that is conscious of its audience. We have enough walls and screens between us.

A:  Find a supportive community! Join me in www.BraveSpace.online