Hi everyone!  Happy New Year or soon to be New Year!  Here is the photo we take in front of my parents' tree every year. 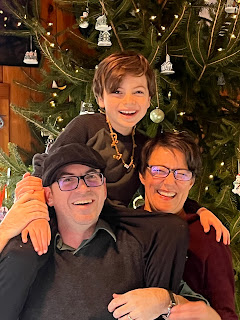 This year marked the first time I was back in a room with actors again.  I didn't realize I think how much I missed it until it was happening.  We shot a short film at Juilliard at the beginning of the year.  I got to work with a great group of 4th year actors and my friend director Michelle Bossy.  Excited for you to see it eventually.  Here is the trailer.
This year we went camping twice, visited VA and Cape Cod both twice.  I was in Los Angeles for a week for meetings.  I was in Vegas for a week for the premiere of Clown Bar 2, a commission from Majestic Rep that was supposed to go up 2 years ago.  It was a lot of fun and I'm super proud of the production and of the play. 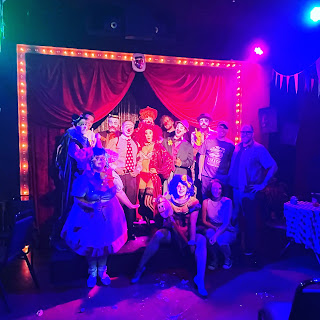 I was also in the Bay Area for a silent writing retreat with Erik Ehn for a week.  During that week, I wrote about half of my output for the year.  Those retreats really work for me.  Every day was like half a month of normal writing time.
Writingwise in 2022, I wrote 30 short monologues for a book coming out next year. I wrote an hour long pilot, a 15 minute podcast pilot, three full length plays, most of a feature screenplay and one one-act play.  I also did quite a bit of revising.
I was in a writing group for parents, a writing group with friends and took part in Flux's core work.
I did only 10 interviews this year.  I'm kind of semi-retired now at the interview thing.  I used to do 100 a year.
I counted how many books I read this year.  50.  I didn't count how many plays I read for my job but it was probably more than 100.
Four plays of mine hit their 50th production this year: Clown Bar (2011), Hearts Like Fists (2012), Kodachrome (2018) and Marian (2017).

Marian had 20 productions this year and Kodachrome had 25, which were both records for me.  The most I ever had of a full length in a single year was 14 of Kodachrome last year.

This year I had a record shattering 6 plays published with 4 more coming next year.

From Sam French/Concord,
One Act version of Kodachrome
Clown Bar 2
UPCOMING: 100 Things I Never Said To You/100 Love Letters I Never Sent

From playscripts,
The Bookstore
The Night Children 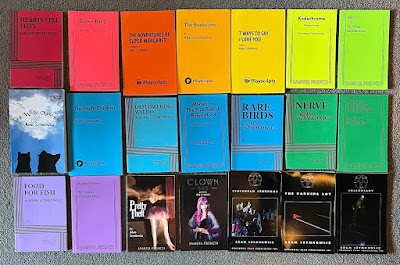 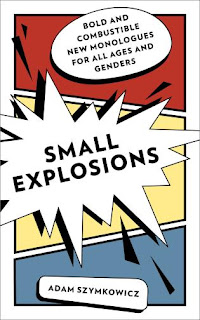 This year I had 67ish productions of full lengths. (20 more than my best year) Caveats— Some of them were probably one act versions of Kodachrome but I'm not sure how many.   An overwhelming amount of these 67 productions were high schools and college productions with some notable exceptions.  Only 12 were not done at schools.  (This is, I think still a lot about the pandemic.  Lots of small theaters are just now starting to do work again.)  In terms of foreign productions, Kodachrome was done in England.  Clown Bar was done in Turkey and at a university in Ireland.  Marian was done in Wales, England, and Switzerland and also in Germany, in German at a 1000 seat outdoor venue.
Including productions of one-act plays, I had just over 100 productions this year.  Now I don't know exactly what the money is I'll make for all that because it sometimes takes six months to get paid but probably it's somewhere around what I made this year which is still far from making a living at this.  I would venture to say a modest living would be 2 to 3 times what I make now.  (So I really want to have 200-300 productions.  Or even more than that if so many of them continue to be school shows where, if they only do one or two performances, I often make under 100 dollars per production.)
I started writing plays in 1997, the summer after my sophomore year of college. And that was 25 years ago. I have written at least one play but often two or three every year for 25 years.